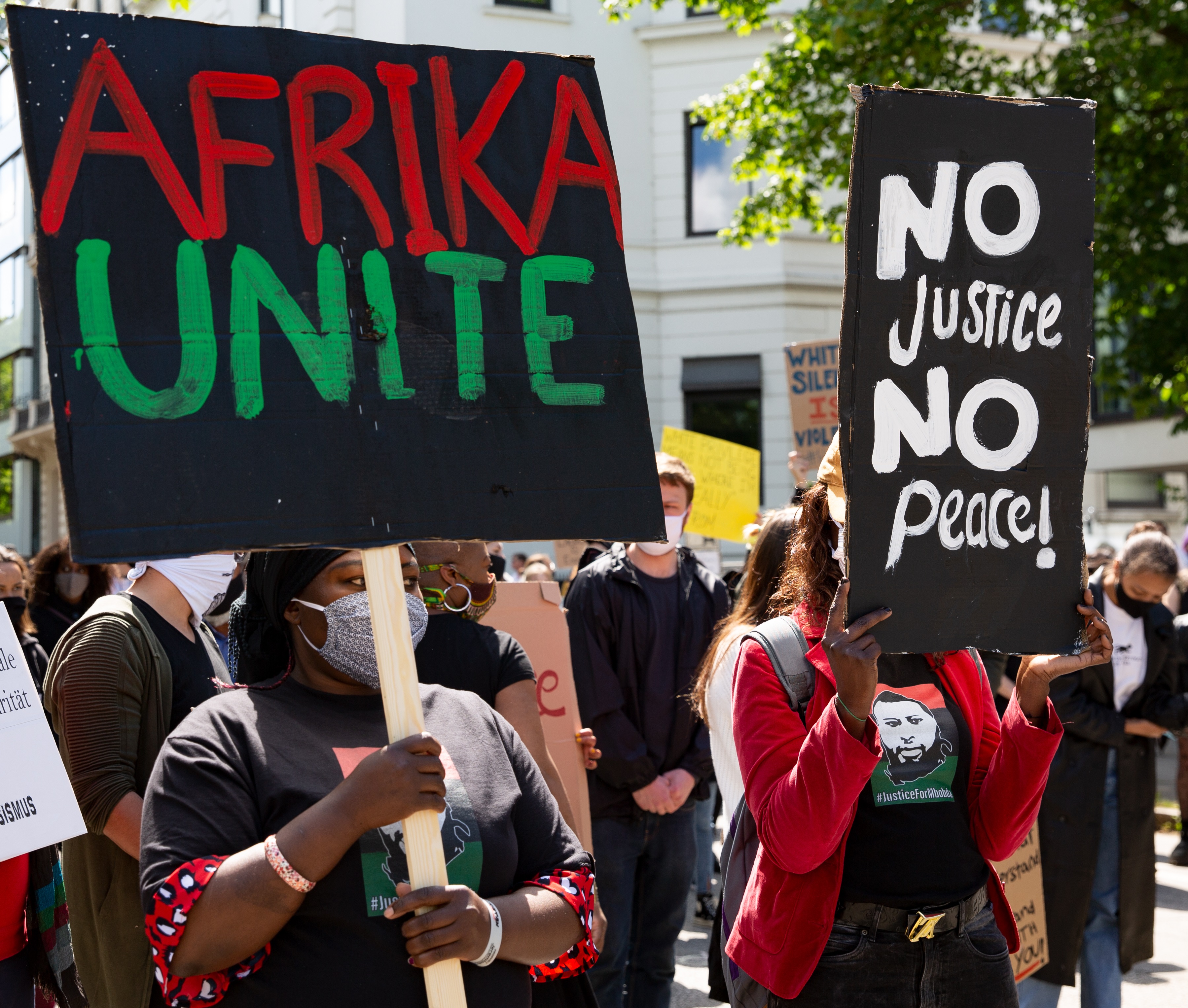 Sista Oloruntoyin (LaToya Manly-Spain) faces criminal charges for allegedly “holding a prohibited or unregistered manifestation and rally in spite of ban or police order to disperse in accordance with Paragraph 26 of the law on assemblies”. About 5000 protesters joined in solidarity to send a strong signal across the globe. We are seeing this juridical criminalisation of Sista Oloruntoyin as an attack on the Black Community in Hamburg and all protesters. We call on all civil society groups and organisations to come out in active support and solidarity.

Political action against racist police brutality should not be criminalised. The CoVid Pandemic cannot be abused to repress political action. It will be a public court case. The amount of visitors will be limited according to current Corona restrictions and the size of the courtroom. However there will be an active protest also outside.

To enter the court, one does not have to show any documents. Mobile phones or cameras are not allowed – but paper and pens for documentation are.

JUSTICE FOR FLOYD! -STOP KILLING BLACKS! – STOP THE RACIAL TERRORISM IN THE USA! Solidarity with the family of George Floyd and with the families of all unarmed Blacks killed by agents of state and armed civilians in the USA and Worldwide – TOUCH ONE! TOUCH ALL! – BLACK LIVES MATTER!

Come to the court hearing and in front of the courthouse and show your solidarity within and together with the Black Community in Hamburg against the repressive Hamburg jurisprudence!

Our solidarity against their repression!

Political actions against racist police brutality should not be criminalised!

Peaceful protest is not a crime and organizers of assemblies are not vicarious agents of police decisions!

TOUCH ONE – TOUCH ALL – Acquittal for Sista Oloruntoyin!

The Hamburg District Court has issued a criminal order against Sista Oloruntoyin (LaToya Manly-Spain) of the Black Community Coalition for Justice & Self-Defence, who had taken over responsibility as one of the organizers and leaders of the “Justice For Floyd”, ‘BlackLivesMatter protest rally on June 5, 2020 in front of the US Consulate.

If found guilty, she is facing the danger of 2 months imprisonment.

She will now be publicly tried on

Courtroom 176 of the Hamburg Criminal Justice Building at Sievekingplatz 3

We will gather in front of the Criminal Justice Building at Sievekingplatz on FEBRUARY 3. 2022 starting at 8:00 am.

On May 25, 2020, Brother George Floyd was brutally murdered with cameras filming in Minneapolis by police officer Derek Chauvin, who spent an agonizing 9 minutes and 25 seconds kneeling on the neck of Brother George Floyd, taking away his breath and life. The gruesome video not only traumatized Black people worldwide, but also triggered international protests on all continents. The Hamburg protests in solidarity took place after running days of mass protests in the U.S. on June 5 with 5,000 participants* in front of the U.S. Consulate at Alsterufer and on June 6, 2020 in front of Rathaus -City Hall and on Jungfernstieg with a total of 15,000 people.

The June 5, 2020 protest rally was organized and registered on  with an expected 5,000 participants. The police allowed a maximum of 250 people according to their interpretation of the Hamburg’s Corona Protection Ordinance. The Black Community, African organisations, Black political associations and Hamburg civil society successfully joined in the global outrage against racist police brutality – despite Corona for two consecutive days!

This global mass protests in solidarity with the George Floyd family and the Black Lives Matter-movement worldwide strongly contributed to a shift of paradigm in the criminal case: the police officers involved were fired promptly, and the killer was meanwhile found guilty of all charges and is sentenced. This course of accountability and justice for a Black life being brutally taken by an officer of state was and still is an extraordinary exception from the painful reason of state with systematic impunity for the killers of Black lives and could only be pushed through by means of organised civil disobedience and worldwide mass protests as took place on June 5 in Hamburg.

The repressive mind set of the public prosecution of Hamburg in targeting and prosecuting just one Black activist woman for the crucial and appropriate anti-racist civil disobedience is an attack on our Black/ African /Migrant Communities  while the same prosecution office turned down all charges against those responsible staff of the UKE hospital responsible for the killing of Brother Tonou Mbobda on April 21 in 2019 exposes the racial bias and perversion of values and laws of this institution. The cases of Brother Tonou Mbobda, Brother Yaya Jabbie and Brother Achidi John who all have been killed at the hands of state and or together with state institution display the very same systemic racism and structural racist impunity that generated the need for the very anti-racist mass protests of June 5 and 6 2020 in the first place.

We therefore call on Hamburg civil society and  to renew their solidarity once again – this time with the Black Community in Hamburg and  Sista Oloruntoyin in court and in public!

Come to the court hearing and in front of the courthouse and show your solidarity against the repressive Hamburg jurisprudence!

Our solidarity against their repression!

Political actions against racist police brutality should not be criminalised!

Peaceful protest is not a crime!

Black Lives Matter! – also that of Black political activists in the fight against a racist police justice!

Courtroom 176 of the Hamburg Criminal Justice Building at Sievekingplatz 3

We will gather in front of the Criminal Justice Building at Sievekingplatz on February 3, 2022 starting at 8:00 am.

TOUCH ONE – TOUCH ALL – Acquittal for Sista Oloruntoyin!