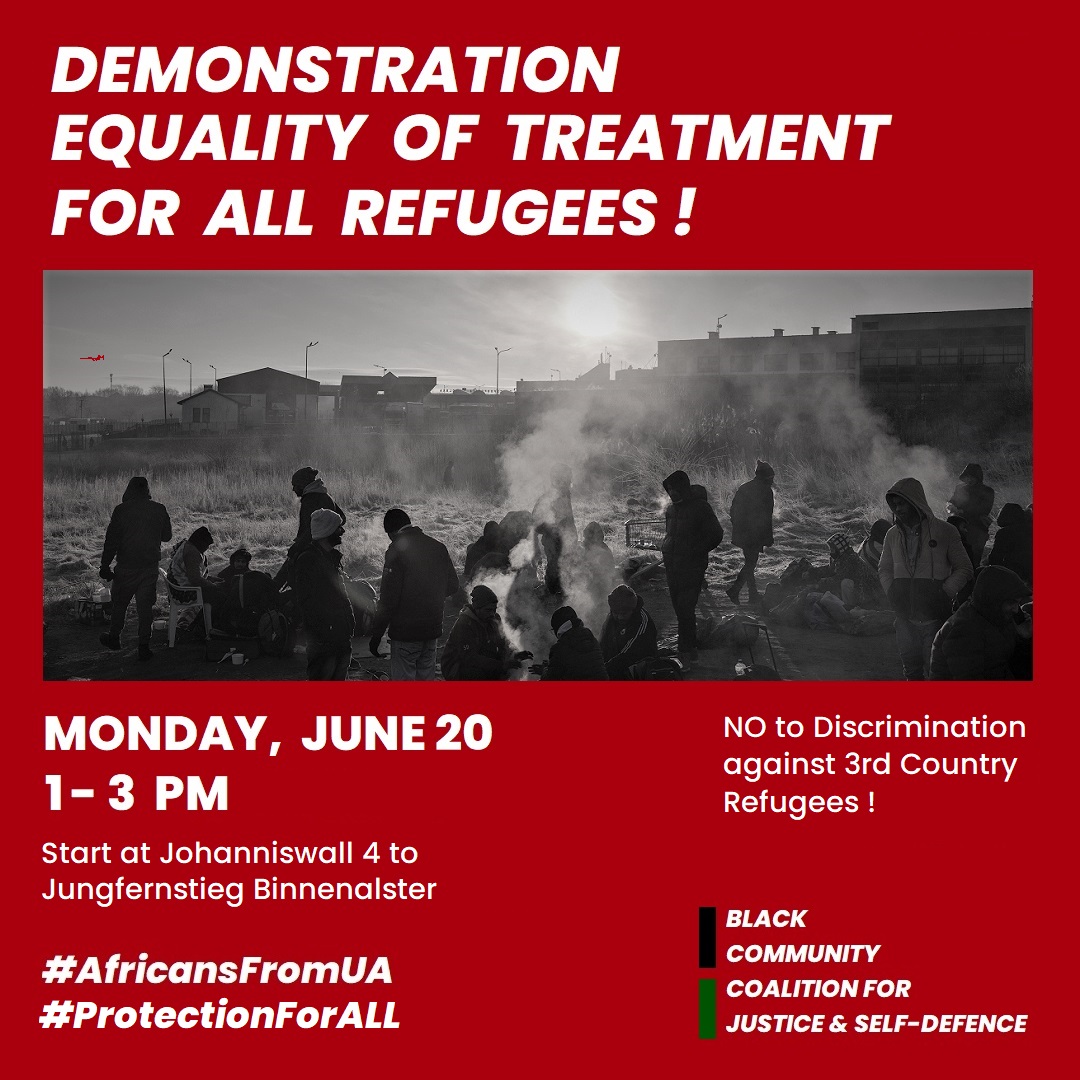 FB-Event Demonstration: Equality of Treatment ->
On this year’s World Refugee Day on June 20, we want to show solidarity especially with African and international refugees that fled the war in Ukraine and are being discriminated against on racial, ethnical or national grounds. They are refugees of the same war, have suffered the same trauma of war and flight from war, had to leave behind their valuables and belongings, their normal lives and achievements – but are treated differently through discrimination and exclusion from temporary protection.
We want to advocate for the right to equal treatment of ALL refugees of ALL wars or due to ALL other valid reasons to flee once country of living.
Pls read the Statement of the self-organized Refugee group “Africans From Ukraine” here: https://blackcommunityhamburg.blackblogs.org/2022/03/29/statement-africansfromua-on-equal-treatment/
So called Third Country Nationals who have lived their lives in Ukraine, who have invested substantially into coming there for valid reasons, who have been caught up in war like Ukrainian nationals too are since then forced into a degrading limbo from day one of this ongoing war.
Temporary protection is meant to un-bureaucratically protect large numbers of refugees fleeing from a war. The scheme was established by the EU in 2001 but only now in 2022 actively implemented for the first time – it was neither activated for the war against Libya back in 2011, nor for the war in Syria in which Western countries are actively involved since 2014 – both creating massive fugitive influxes into the EU.
The exclusion from the temporary protection scheme of the EU as a whole and with every single EU country is a continuation of the violence and logic of war beyond the actual war zones. Refugees of non-European countries are systematically excluded from social and medical care and stripped of their human and constitutional rights by arbitrary treatment of immigration authorities.
Our demonstration will give space for the perspectives, needs and demands of those concerned and excluded. Testimonies of violations of their rights and dignity will be denounced to the public and the authorities in charge.
We invite you to be witness of the testimonies of abuse and part of the solidarity for ALL refugee on this very day and beyond!
Enough is Enough !
TOUCH ONE – TOUCH ALL !!!